Attention Water & Sewer District Customers!: The Town of Chazy is now accepting online payments with credit, debit, or eCheck via our Water Payment Portal. Please click the following link to view your account or make a payment online. There is a convenience fee of $1.95 for eCheck and 2.95% for credit and debit cards that goes directly to the payment processor to cover the costs of providing the service. Town of Chazy Water Payment Portal 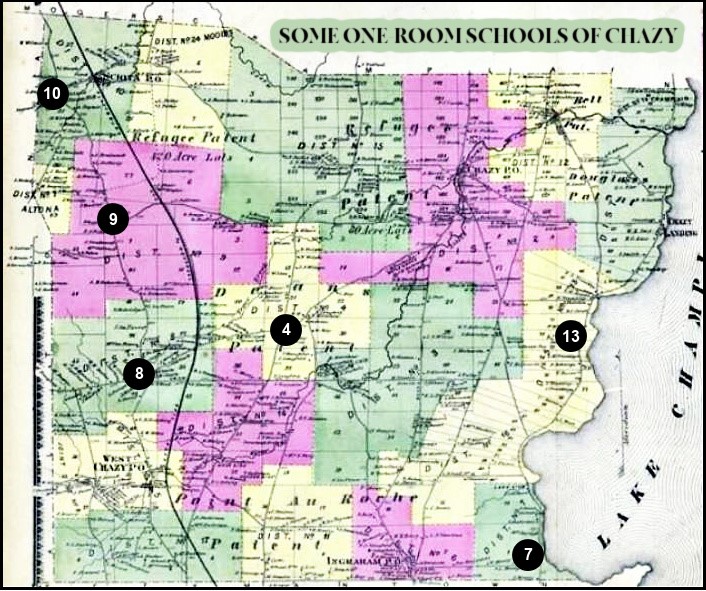 CHAZY HISTORIAN’S OFFICE – Ellen Riley, the Chazy Historian, has these photographs of one-room schools hanging in her office. The office if filled with a treasure trove of information and photographs from bygone days. If you’d like to visit the office, you can contact her at 518-846-7544 x 6 or [email protected]. Her hours are Tuesdays and Wednesdays from 9 to 12.

Chazy has an over 200 year history of education in the Town. The following article gives some of its early history.

From the History of Clinton and Franklin Counties – Hurd – p. 288

Chazy from its earliest history was always noted for its excellent schools. The teachers were generally either graduates or students of some of the Eastern colleges. Among the number were Alexander H. Prescott, who taught school somewhere about the year 1812, previous to his taking up his residence in Plattsburgh as a teacher in the old academy; Amasa C. Moore, late of Pittsburgh; Jed. Sawyer, eldest brother of Miss Minerva Sawyer, of Plattsburgh; Charles C. Severance, of Burlington College; Hon. Bela Edgerton, brother of Mrs. Capt. Septa Fillmore; and others.

On April 17,1813, the town was divided into six school districts, by Elisha Morgan, Nathan Carver, and John Horton, commissioners. A seventh district was added a few days later.

The commissioners' certificate of apportionment, recorded April 4, 1879, shows that there are 17 districts in the town, and the number of children in attendance between five and thirteen years of age is 1,104, with an average daily attendance of 400.567.

1834 – Alexander H. Prescott – was an Inspector of Common Schools for Clinton County while a teacher at Plattsburgh Academy.

1825 - Amasa C. Moore – gave up teaching and became a lawyer to set up his practice in Plattsburgh

1848 - Jed. Sawyer – Gave up teaching and moved to Illinois to work in the lumber business

1850 - Bela Edgerton – Became an attorney and moved to Fort Wayne, IN